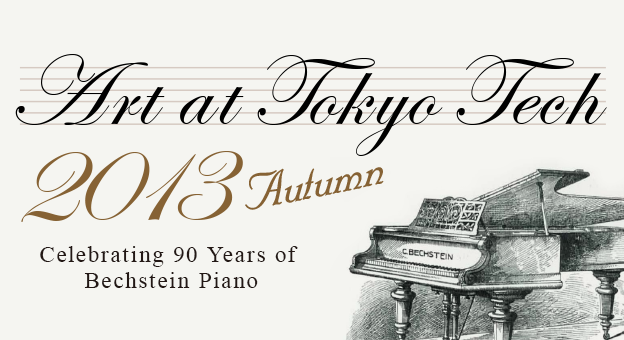 Fusing the Arts with Science and Technology

Tokyo Tech has engaged in research and education that fuses the arts with science and technology since its founding in 1881. Dr. Gottfried Wagener, who played a key role in the founding of Tokyo Tech, represents such a fusion of the arts and technology with his research into ceramics. The Institute has also produced numerous other world-renowned ceramic artists such as Hazan Itaya and Shoji Hamada, as well as celebrated architects, including Yoshiro Taniguchi, and other highly productive innovators in the various fields of the arts.

In keeping with this tradition, Art at Tokyo Tech was launched in 2004. Inviting talented artists from around the world, we have continued to develop our education fusing the arts with science and technology through lectures, performances and exhibitions. An important factor behind this program was the discovery on campus of a Bechstein Model E Grand Piano, manufactured in Berlin, Germany in 1923 and said to be one of the world's preeminent pianos.

From Germany to Tokyo Tech 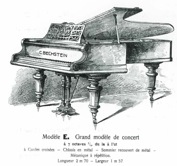 Tokyo Tech is home to a full concert Model E grand piano manufactured by the German company C. Bechstein. This model is said to have been the world's finest piano produced in the period before World War II. At that time, Bechstein was one of only three prominent piano makers, the other two being Steinway in the United States and Bosendorfer in Austria. The Tokyo Tech Bechstein piano is estimated to have been manufactured in the early 1920s based on its case number alone, as there is no discernible serial number. Of the few pianos manufactured during this period that remain in Japan, the Tokyo Tech piano is probably the only one that is still frequently used in public concerts some 90 years later.

Shipped from the Port of Hamburg, the Tokyo Tech piano is thought to have arrived at the Yokohama Port via the Suez Canal, Singapore and Shanghai around the summer of 1923. During a visit to the Bechstein company in July 2013, sales records were produced that confirmed the shipment of a Model E piano to Kyoyeki Shosha on April 7, 1923. Of the Model E pianos manufactured between 1920 and 1925 destined for Japan, this is the only one whose provenance is consistent with what is known about the Tokyo Tech piano.

In 1985, the piano that had been forgotten in the auditorium was repaired, regained attention, and was used for the entrance ceremony concerts between 1986 and 2007. Following a major restoration in 2004, the piano is now used for Art at Tokyo Tech concerts, promenade concerts and entrance hall concerts.

The theme of this year's Art at Tokyo Tech, "Celebrating 90 Years of the Bechstein Piano", commemorates the 90th anniversary of the manufacture of the Tokyo Tech Bechstein piano. The program attempts to create a contemporary interpretation of music from the 19th and 20th centuries.

Lecture: "Prosperity and loss in the world of pianos in Japan"
Sachio Moroishi (Music critic)

Lecture: "Management of the middle class in Germany - Piano manufacturing, the arts and principles of handcrafted products such as the piano"
Carl Schulze (CEO at C. Bechstein)

Unlike the cembalo and other predecessors which involve little more than simply hitting a string, pianos are precision machines with sophisticated mechanisms and their construction was only possible after the industrial revolution of the 18th and 19th centuries.
Entrepreneur, scholar and piano master Carl Schulze will discuss its evolution.

Lecture & Concert: Professor Yves Henry
"The relationship between the technological evolution of the piano and 19th century piano works - The works of Schubert, Chopin, Schuman, Liszt, Rakhmaninov, Debussy and Ravel"

Professor Henry will perform and explain the relationship between pianos and the piano works of famous composers and musicians from the early 19th century when our Bechstein piano was manufactured.

This multidimensional program seeks to foster an appreciation of the history of the piano and piano music among people unfamiliar with classical music through careful commentary as well as enable music aficionados to make new discoveries. I look forward to your participation in these ambitious events.