Learning the Processes of Manufacturing 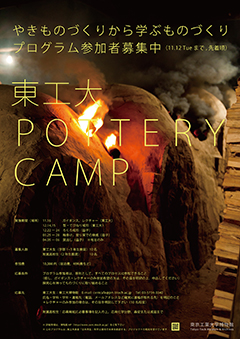 The Tokyo Tech Museum and Archives ran the Tokyo Tech Pottery Camp for approximately six months from November 2013 through April 2014 under the joint sponsorship of the Department of Inorganic Materials in the School of Engineering and the Tokyo Tech High School of Science and Technology.

This educational program was possible thanks to the cooperation of Mashiko Town in Tochigi prefecture which made it possible for students with various Tokyo Tech affiliations to learn firsthand about the manufacturing processes of pottery.

Education and research in the fields of science and technology at universities and research institutes today continue to advance. In the midst of intense competition, remarkable results are produced in everyday research activities. At the same time, leading-edge activities promote the specialization of research in some areas. As a result, researchers and students tend to lose sight of the opportunity to rethink common processes in science and technology and manufacturing, such as societal motivation and goals, development of plans and designs, feasibility, and evaluation. In addition, it is difficult for researchers and students to objectively view where they stand vis-a-vis their research or studies. Taking into consideration these circumstances, the Pottery Camp was organized with the aim of offering students who are studying the basics of science and technology the opportunity to acquire a fresh perspective on the manufacturing processes through firsthand experience.

Pottery and Tokyo Tech have had a long and close relationship since Tokyo Tech's foundation. The Pottery Camp was an experimental program in which students could take part in a series of manufacturing processes with others while learning theories, creating pieces of art, firing them in a climbing kiln, and giving presentations. The venue for the program was Mashiko Town where Tokyo Tech alumni and living national treasures, Shoji Hamada and Tatsuzo Shimaoka, resided and potted. Support was provided by many people, potters and organizations in Mashiko, including Tokyo Tech graduate and potter Hiroshi Murata, Mashiko Town, Mashiko Museum of Ceramic Art, and the Mashiko Pottery Shop Association.

The Pottery Camp was divided into six phases in order to allow participants to experience the various manufacturing processes related to the craft of pottery. The program aimed to introduce the design process: theory, plan/design, production/work, and evaluation/feedback.

The Pottery Camp began in November with lectures. Then participants worked with clay in December at Tokyo Tech and in Mashiko Town. Glazing and firing were done in March and presentations were given in April. For about six months, five Tokyo Tech students and sixteen students from the high school worked together making pottery. 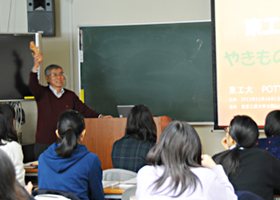 Participating students studied basic theories for planning and designing their artwork. As a step prior to the actual working with clay, they learned about the necessary processes and steps.

“Tokyo Tech and Mashiko Town” and “The Manufacturing Processes of Pottery” by Osamu Sakurai, Associate Professor, Department of Metallurgy and Ceramics Science, Graduate School of Science and Engineering

“The Science of Glaze” by Akira Narita, Teaching Staff at the Tokyo Tech High School of Science and Technology

The Planning of Pottery: 20 - 30 pieces of art (or pots) to be prepared by each student and then fired in the three chambers of a climbing kiln

Demonstration of throwing on a potter's wheel 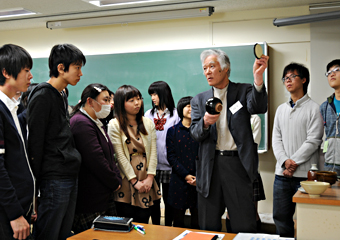 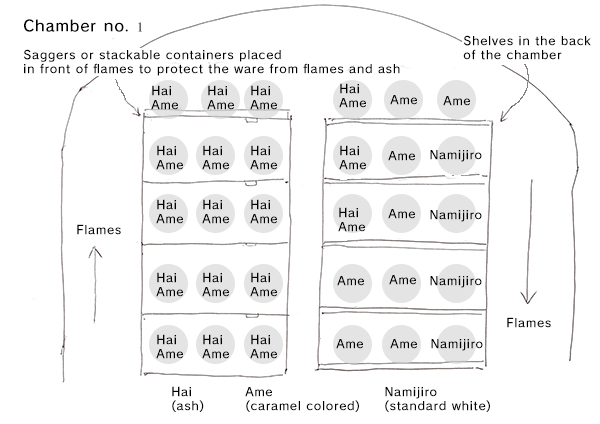 Participating students started potting with molds and shaping clay by hand at Tokyo Tech's Ookayama Campus. 500 kg of low-water clay was prepared. Students shaped the clay with four types of wooden tubular molds and two types of bowl-shaped unglazed molds. After shaping the clay, students made patterns on or attached handles to their pieces demonstrating their creativity.

In the hand building session, students molded clay by building up rings of coils. There were no limitations on how to shape the clay, so pieces shaped like animals or plants were also possible. 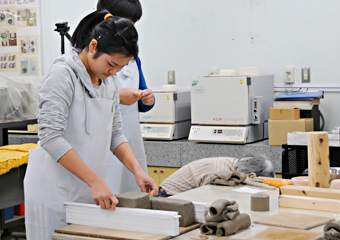 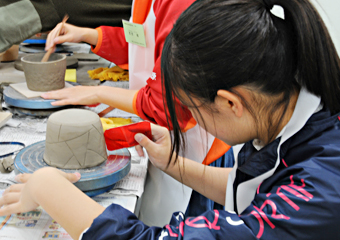 Engraving patterns on the pottery

Participating students moved to Mashiko Town and stayed there three days and two nights for throwing pots on a potter's wheel. Two students shared one wheel for throwing. The bigger the artwork became, the easier it was for it to lose its shape due to the effects caused by small distortions. Using a wheel shortened the time needed to make a piece, but required a large amount of concentration. In addition to engaging in clay work, students visited the Shoji Hamada Memorial Mashiko Sankokan Museum and the Tsukamoto Pottery Studio. 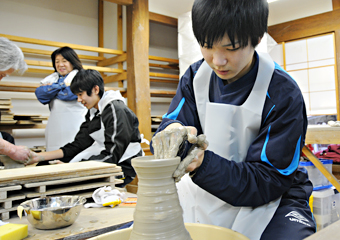 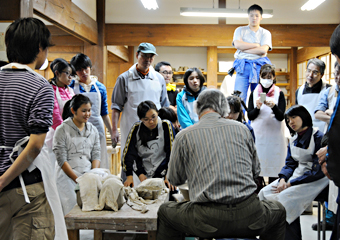 Demonstration of how to
make a large plate

Before biscuit firing, it is necessary to trim the foot of a bowl made on the wheel and finalize the shape of the pot. Due to time constraints, this process was done by Mr. Murata, Mr. Abe from the Ceramic Art Messe Mashiko & Studio, and Mr. Nakayama from Mingeiten Mashiko. After that, the pieces were left to dry and fired in an electric kiln.

Participating students gathered again in Mashiko Town in March. When loading a climbing kiln, the location of each piece is determined by the type of glaze it is to have. Therefore, students classified their pieces by glaze type before glazing. The task of glazing was divided into three parts: glazing the pots, cleaning the bottoms of the pots to avoid having them stick to the shelves during firing, and sorting them for loading in the kiln. 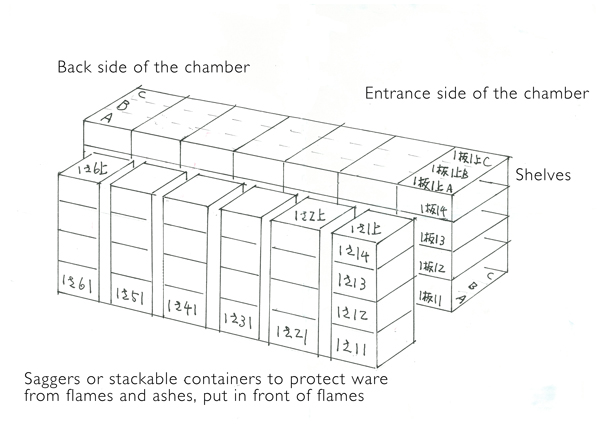 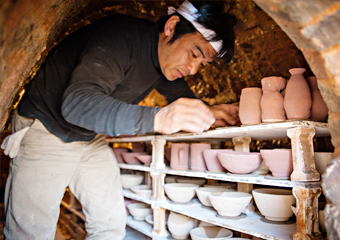 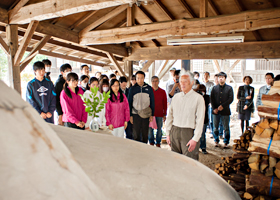 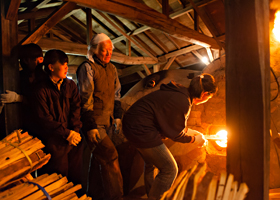 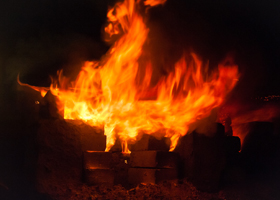 Flames rising from the kiln's chimney

Firing continued throughout the night. For the firing during the night of March 27, students were divided into two groups to add firewood through the main stoke hole into the fire box of the kiln or through the smaller stoke holes located on both sides of each chamber. The timing and amount of firewood to be added were determined according to a pyrometer called a Seger cone located in the kiln. By controlling the flames and the amount of oxygen, chemical changes and effects in the clay and glazes were induced. 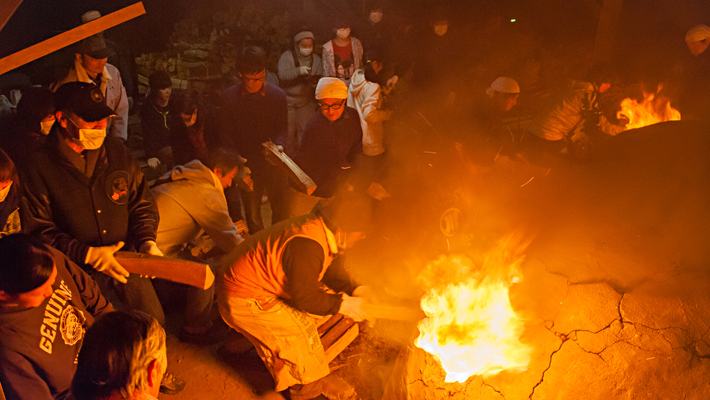 For the long-awaited unloading of the climbing kiln, students returned to Mashiko Town. More than 500 pieces of pottery were produced at the Pottery Camp. Presentations were given to showcase the students' pots and artwork in which they reported on their experiences in the program. Local people were invited to hear the presentations of the students which were broken down into four themes. 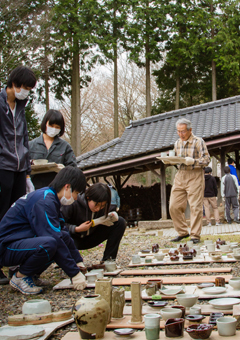 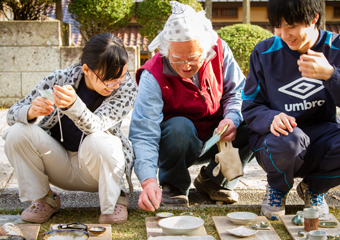 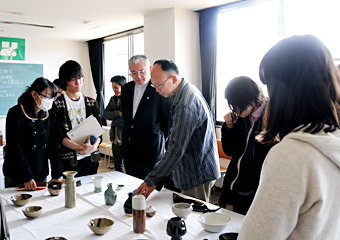 The Fruits of Pottery Camp and Future Developments

Participating students embraced the challenges pottery manufacturing presented them. As none of them had any prior experience before participating in this program, they learned the importance of careful planning in the preparatory stages, such as processing the clay, preparing and storing the firewood, and creating a detailed plan based on a predicted temperature and flame distribution pattern in the climbing kiln. In addition, students selected glazes and the appropriate locations for their pots in the chambers of the climbing kiln according to the numbers, sizes and thicknesses of their pieces. During firing, they controlled the amount of firewood and oxygen as they watched the temperature in the kiln. Although students created a comprehensive plan, they had to adjust things as needed to produce the best outcomes. In this way, they experienced the actual processes of manufacturing firsthand. These very experiences were what the Pottery Camp aimed for and were a sign of the success of the program.

The Pottery Camp is the third regional cooperative effort between Tokyo Tech and Mashiko Town. The first two were the exhibitions Experience Mashiko-Yaki Pottery at Tokyo Institute of Technology held in 2012 and Tatsuzo Shimaoka's Works of Art, the Nakazawa Collection owned by Tokyo Tech's Museum displayed in commemoration of his being awarded honorary citizenship in Mashiko Town in 2013. The Museum will further develop educational activities, disseminate research with a focus on manufacturing, and promote relationships with regional communities. 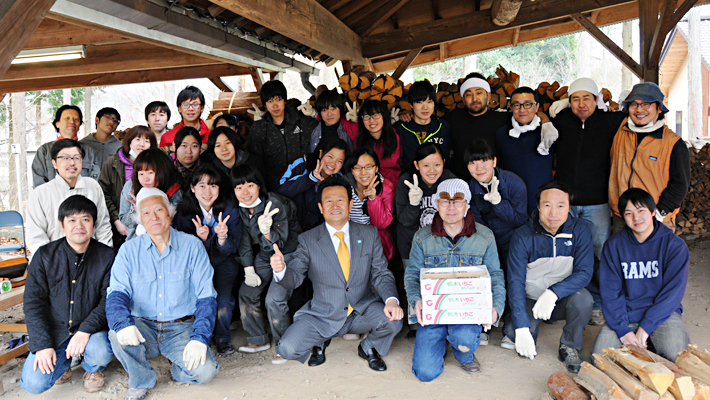 The Pottery Camp was supported by the Cultivating Human Resources for Manufacturing program, a program of the Tokyo Institute of Technology Foundation.

Lecture 3, Hand Building and Wheel
Hiroshi Murata, potter, Class of 1966, Department of Inorganic Materials in the School of Engineering, Tokyo Institute of Technology