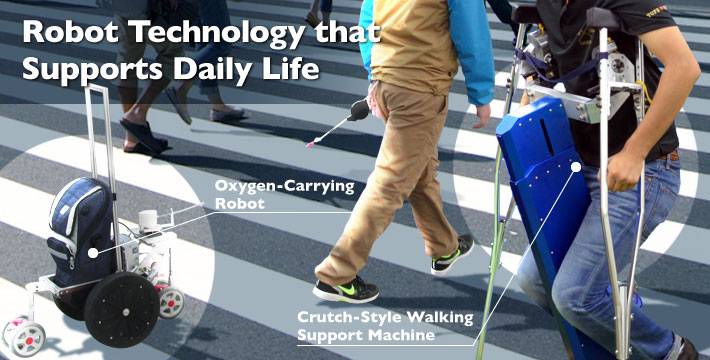 Robots will support the daily life of the physically challenged. Such a society may be realized in the near future. Presented below is research aimed at creating a society where everyone can live comfortably.

Department of Mechanical Sciences and Engineering

Graduate School of Science and Engineering 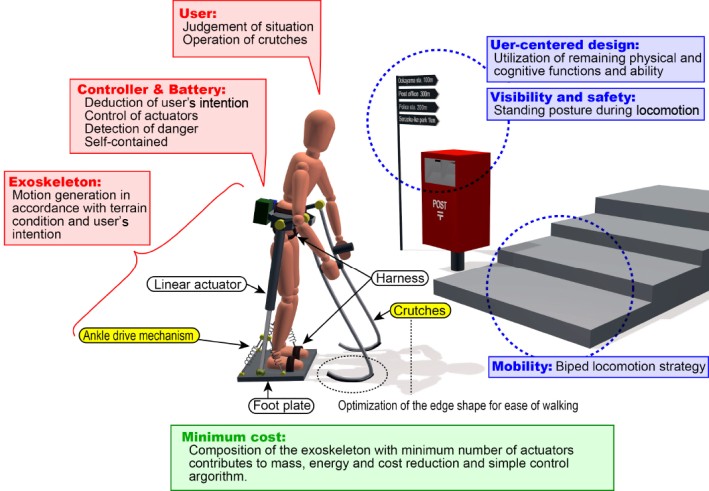 What is a Crutch-Style Walking Support Machine?

Designed for people who experience physical challenges in both legs, this simple, low-cost device enables them to move while maintaining an erect posture. It was developed at the Takeda Laboratory, in the Department of Mechanical Sciences and Engineering of the Graduate School of Science and Engineering.

According to the 2011 National Survey on the Situation of Homebound Handicapped Children and Adults (Japanese), conducted by the Ministry of Health, Labor and Welfare, there are approximately 820,000 people in Japan who live with leg disabilities, and most of them use wheelchairs. However, while wheelchairs are simple and easy to use, they also have many shortcomings with regard to everyday life. For example, it is difficult to reach high places when sitting in them, and they are difficult for pedestrians and cars to see. The crutch-style walking support machine aims to improve the quality of life for such people and to promote their participation in society.

Enabling an Erect Posture while Being Simple, Easy to Handle, and Inexpensive

An approach that is often taken when designing a machine that supports ambulation with an erect posture is to produce movement of the legs by utilizing a device similar to a bipedal walking robot, with motors placed in locations corresponding to human joints. However, this approach requires a large number of motors and sensors, which can lead to problems. The structure of the device and the control algorithm can become complicated. The user can have difficulty attaching and detaching the device without assistance and getting used to the method of manipulating the device can also be difficult.

Therefore we thought of creating a machine that has a simpler structure. In general, most people with leg disabilities have healthy arms and hands, and can thus use crutches. Accordingly, we decided to develop a crutch-style walking support machine, with which the majority of complicated functions - the stabilization of ambulation, the adjustment of stride, etc. - could be carried out with the arms and hands, and the only functions performed by the machine would be extending and retracting the user's legs.

The machine is composed of an actuator (drive mechanism) and a battery to power it; a microcontroller for controlling the actuator and receiving the user's manipulations; parts for transmitting power; and, frame members. This is basically the same arrangement that is found in power-assisted bicycles, which have become widespread recently. In other words, in principle it is possible to manufacture this machine at around the same price as one of these bicycles.

Moreover, since the machine has a tripodal structure, it can maintain a stable posture and minimize the risk of the user falling before he or she becomes used to manipulating it. In research now under way, we are developing a method of deciding on the machine's movement patterns for walking with different strides and traversing uneven surfaces, as well as a method of design for making a machine that consumes little energy and is comfortable to use.

It is often said that “health starts with the legs.” That is, independent movement is one of the indispensable bodily functions for leading a normal life. The crutch-style walking support machine can be used not only by the physically challenged, but also by the elderly and people recovering from injuries. We believe it will be important for realizing a sustainable aging society in the future.

In the fall of 2012, in Dusseldorf, Germany, we exhibited a prototype at Rehacare, the world's largest trade fair for welfare devices. The machine received numerous favorable reactions. For example, fair goers in wheelchairs asked, “Is it already being sold? What is the price?” A local television station did a story on it. Moreover, researchers promoting a type of therapy, in which children and students with disabilities conduct various activities in large groups that include people without disabilities, expressed the view that such a machine could be of great use.

From these and other experiences, we believe there is a large demand for a simple method of supporting independent ambulation. We are aiming for the advent of a society in which walking support machines will be generally and widely used, like today's power-assisted bicycles. 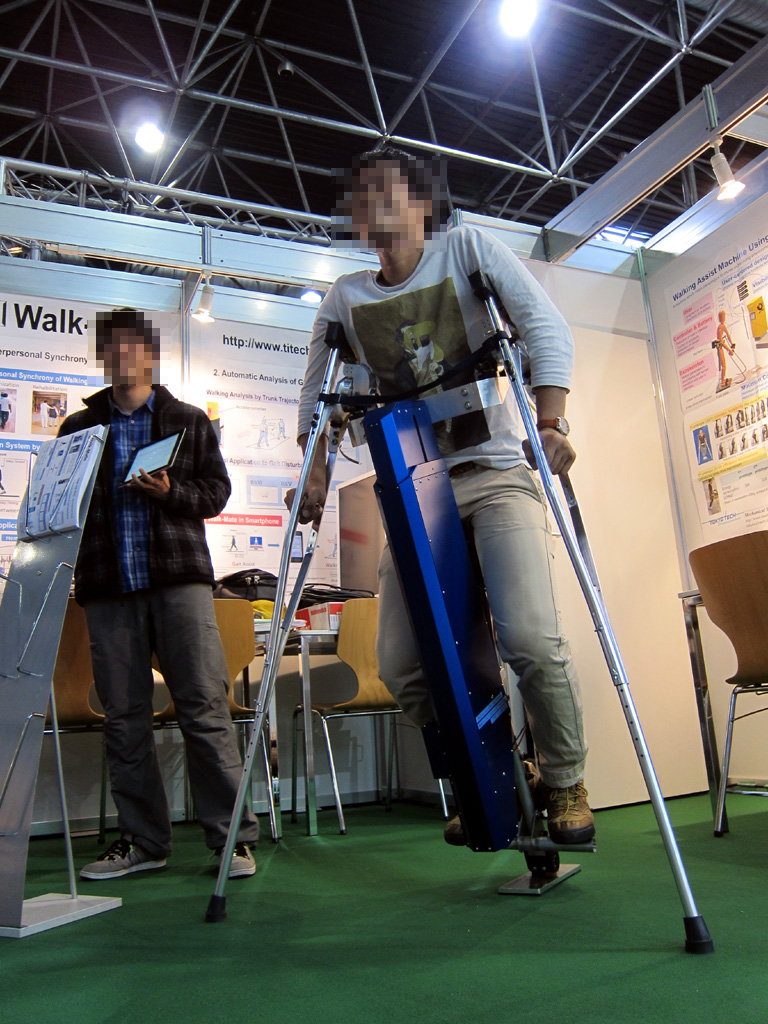 Prototype No. 3 on display 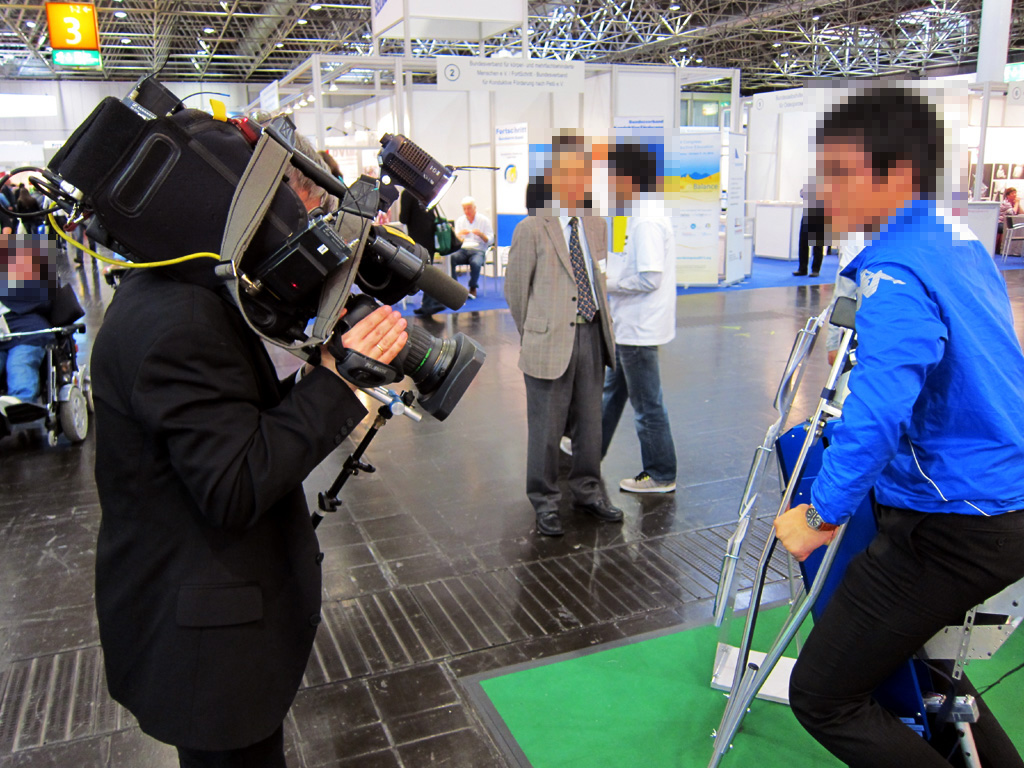 Department of Mechanical and Aerospace Engineering

Graduate School of Science and Engineering

Do you know of the therapy called home oxygen therapy (HOT)? Used by people whose pulmonary function has declined, HOT is a therapy that maintains the oxygen concentration in the blood by supplying highly concentrated oxygen through the nose or mouth. In Japan approximately 160,000 people use it. In order for them to maintain their quality of life and physical strength, walking and other exercise is generally recommended for them. However, when they go out they have to take a portable oxygen tank and a cart to carry it which weigh approximately 4 kg. As a result, going out can become so bothersome for them, that they tend to become shut in at home and sometimes even fall into depression.

In order for such people to be able to easily go out and improve the quality of their lives, the Fukushima Laboratory of the Department of Mechanical and Aerospace Engineering in the Graduate School of Science and Engineering is engaged in research and development, led by Assistant Professor Gen Endo, on an “oxygen-carrying robot,” or an electrically powered mobile carrier that holds an oxygen device and automatically follows the person.

The Image of a Dog Being Taken for a Walk 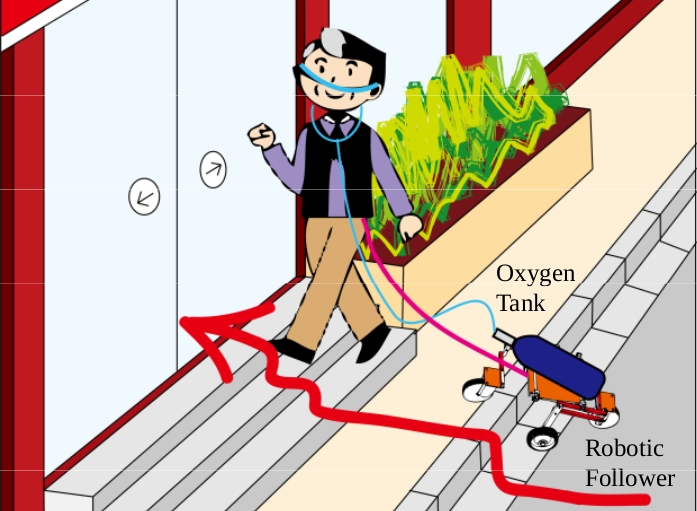 The idea of a robot that follows people and carries things for them is very old. On first thought you might think that such a robot can easily be made. However, many of the robots developed thus far have used wireless measuring devices, such as laser range finders and stereo cameras, and such devices are expensive, costing tens of thousands of yen. It is also difficult for them to precisely calculate the location of a person moving in front of them when outdoors. 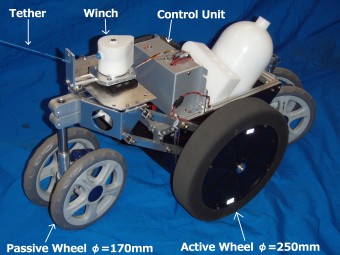 Considering that the vehicle would move along the sidewalks outside, we looked into creating a vehicle structure that could climb up and down the roughly 80-mm curbs which ordinarily separate the sidewalks from the streets in Japan, and that would also be compact and lightweight. Accordingly, we studied the structure of planetary exploration vehicles, which are able to progress over uneven ground, and conceived of a diamond-shaped arrangement that has two wheels without motive power at the front and the back and a drive wheel in the center on each side.

The front wheels and drive wheels are connected by parallel linkage, so that the weight balance can be appropriately allocated when the vehicle traverses uneven surfaces, and the vehicle can climb uneven surfaces that are approximately twice as high as what previous four-wheel vehicles could manage. The prototype is 670 x 460 x 420 mm in size and weighs 7.5 kg (including battery and tank). It can carry an oxygen device of approximately 2.5 kg, and can run for at least three hours and 15 km on a single charging.

At present, in cooperation with various organizations, healthcare professionals and patients, we are continuing to make improvements based on trial tests and user needs. If this kind of device can be made practical, it can be used not only by HOT patients but also by elderly people for whom going shopping is difficult. Moreover, the vehicle mechanism alone could be used to make better wheelchairs and baby strollers that can easily traverse uneven surfaces.