On the road, on the track, on the soccer pitch 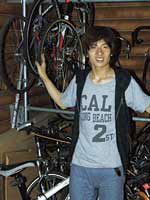 Tetsuro Uchinishi, the representative of Tokyo Tech's cycling club and the captain of the touring group, is a third-year student in the Department of Social Engineering.

"The cycling club here at Tokyo Tech has three groups," explains the club representative, Tetsuro Uchinishi. "We have a touring group, a racing team, and a cycle ball [soccer] team, and we have about 50 members overall. More than half of our members participate in the touring group. Some 10 or 15 students are on the cycle ball team. A smaller number participate in racing, some of them in road racing and some in track sprinting."

"The cycle ball and racing teams participate in intercollegiate competitions," continues Uchinishi, who heads the touring group as well as serving as the club representative. "But the touring group is noncompetitive. Instead, we go on day trips and overnight rides on the weekends and go on extended rides of up to three weeks once or twice a year. Some members might get together for a ride around northern Japan, for instance. Others might head south for a ride around Kyushu." 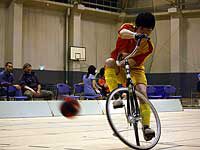 The cycling club has groups for touring, for track and road racing, and for cycle ball.

Bicycle racing at Tokyo Tech means twice-a-week training sessions and participation in occasional intercollegiate events. Professional track racing, where spectators bet on the races, draws large crowds in Japan, and the track owners make their facilities available to university teams for training and for races.

Cycle ball, meanwhile, is essentially soccer on bicycles. The participants use their wheels and their feet to pass, shoot, and block the ball. Tokyo Tech is especially strong in cycle ball and is a perennial contender in the intercollegiate competitions.

"We maintain a pretty relaxed atmosphere in the cycling club," says Uchinishi, "especially in the touring group. People take part as much as they want to. That includes choosing the amount of distance they want to cover on the extended rides. For example, some riders might set out on their bikes from Tokyo for a ride in the mountains. Others might carry their bikes on a train and rendezvous somewhere along the way."