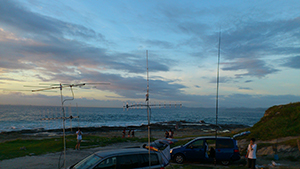 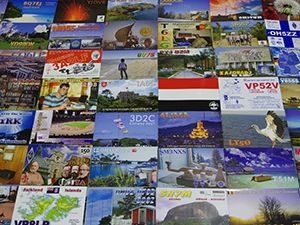 Cards from all over the world 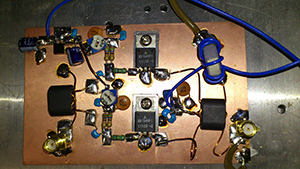 An electronic circuit made by a club member 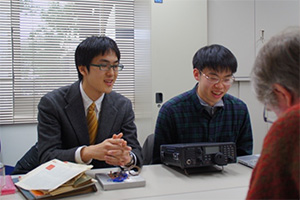 In this age of the Internet, Facebook, instant messaging and Skype, ham radio is just a quaint memory, right? Not so. Tokyo Tech's Radio Communications Research Club has 30 enthusiastic members who consider amateur radio to be the most exciting form of communication out there. "Sure, it's easy to communicate via the Internet," says Wataru Naruki, a third-year electronics engineering student and the club's leader. "But it's too easy. There's no challenge. With radio, you get to communicate directly with people from all over the world you never met before. Now that's exciting."

The members focus on three related areas: ham radio communications, designing and making electronic circuits and devices, and programming. "I'm fascinated by wireless circuitry," says club member and sophomore Masamichi Murayama, also studying electronic engineering. "And I love to design new types of radio circuits, although members are free to design and make whatever they like. Same for programming."

So rather than dying out, Naruki (call sign JG1OIY) says ham radio's activity is on the rise again, as older radio operators return to the hobby of their younger days. Others are attracted because they can connect their PCs to radios and send digitized voice or text messages over the air to similarly equipped users on the other side of the globe. Murayama (JH1BKT) estimates there are roughly half million hobbyists in Japan.

And operators are "really friendly," says Naruki. "When we contact someone new, we exchange cards." These are customized cards that operators design themselves. He has collected over 1,000 of these cards sent from scores of countries. "This is a really fun part of the communication," he adds.

The club takes part in three contests every year to see who can communicate with the most number of operators. The club members participate in shifts and have contacted as many as 2,000 people over 24 hours.

There is also a public service aspect to the hobby that shouldn't be forgotten, Naruki points out. During times of natural disaster, operators often play a vital role in maintaining communications, when conventional forms, such as mobile phones and PCs, often fail to work.