Bull's-eye! That's a declaration of conclusive accuracy for an ordinary archer. It is only half the story, however, for practitioners of Japan's archeristic art of kyudo — the way of the bow. In kyudo, the participants seek a unity of mind and body, as expressed through the hopefully true flight of the arrow. Striking the heart of the target is the result, rather than the purpose, of attaining the kyudo goal of harmony of flesh and spirit. 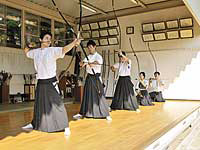 Kyudo archers take turns at the targets in the daily practice at Tokyo Tech. University alumni financed the construction of the kyudo facility and contribute funding for its upkeep. 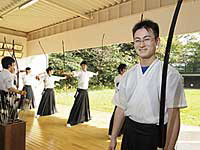 "This was the first place where most of our members took a bow and arrow in hand," reports the kyudo captain, Toshihiro Takahashi, a third-year student in computer science. "But some of us participated in kyudo in high school. I make suggestions about form and technique when I notice something, but the members pretty much refine their style on their own. Some of us make visits occasionally to the Tokyo studio of a master in our school of kyudo. Everything, however, is basically voluntary."

Intercollegiate competition takes place separately for males and females, though the daily practice sessions are entirely coed. Tokyo Tech's kyudo club typically comprises between 20 and 30 members, and the composition by gender reflects the population profile of the university's student body, which is predominantly male. The club has performed well in male and female intercollegiate competition over the years. Its primary emphasis, though, is on personal development rather than competitive results.