A winning team of rowers 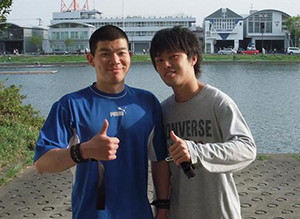 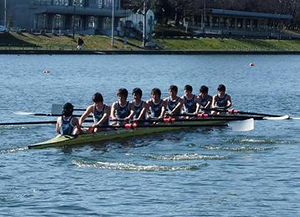 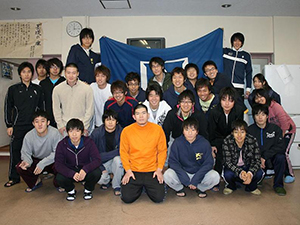 Members of the Rowing Club

Tokyo Tech's Rowing Club is all about winning. The 25 members train hard daily and as their successive series of competition wins show, this demanding regime pays off.

"We practice every morning from about five to seven o'clock," says club captain Satoshi Hashimoto, a fourth-year student of chemistry. "Everyone attends who is not sick or injured, and before competitions we also train on campus running and using weights."

They practice rowing on the splendid Toda Boat Course in Saitama Prefecture, the site used for the Tokyo Olympics in 1964. All the members live in a nearby university dormitory, about an hour's travel away from the Okayama Campus.

"When new members start they have ordinary physiques like everyone else," says Hashimoto. "But when you've been rowing for a few years, you really develop a strong body. It's hard work but rewarding."

The Club has a history stretching back 120 years and owns some 20 rowing boats ranging from 1-man to 8-man boats. An 8-man boat costs between four and five million Japanese yen, and most of the purchasing costs have been provided for by the university and the Club 'Old Boys'. Members of the 8-man boat have achieved a top speed of 2,000 meters in just under 6 minutes — roughly the physical equivalent of playing two back-to-back basketball games, according to some physiologists.

"Members help a little with general payments and we buy our own uniforms," says Club manager Hiroyuki Iguchi, a fourth-year undergraduate studying polymer chemistry. "As manager, I do the organizing for competitions we enter and I liaise with the Old Boy members. We also have four female members who support the team in various ways."

The Club takes part in three major annual competitions: one in which five universities compete, one that includes all the universities in Japan, and one that is open to everyone and involves knock-out stages. The Club has won the five-university intercollegiate contest for the past three years, a notable achievement that says much for the dedication of the members.

"Of all the circles and clubs in the university, we practice the most," says Hashimoto. "We want new members with a winning mentality to join us — we are all about winning."