Sky's the limit for this club 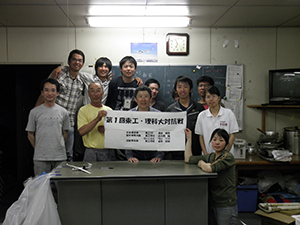 Yo Sakuma, back row extreme left, and other members including alumni 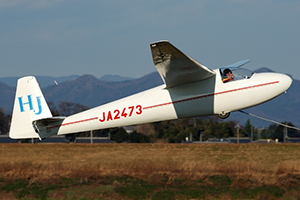 It may not be the most popular of student circles, but that doesn't stop the five members of the Tokyo Tech Soaring Club from shouting on high the thrills experienced when gliding. The club got off the ground in 1962 and today boasts the use of two two-seat glider planes. These are loaned to the club by the university.

"I joined after members invited me on a trial flight during my first year here," says Yo Sakuma, a third-year undergraduate majoring in electrical and electronic engineering. "It was a thrilling experience and I was hooked." Now he is the leader of the group.

The club makes regular use at weekends of an airport in Chiba or occasionally one in Saitama. Other university gliding clubs use the same airports and the different groups often mingle and share experiences and gliding techniques.

Because a glider is engineless, it has to be pulled into the sky, usually by a tow plane and towline. The line is released when the glider reaches a certain height above strong thermals: the upward currents of warm air that large birds like albatross make use of to soar over the earth. In spring and autumn, thermals in Japan can exceed 1,500 meters.

"To cover the expense of the tow plane, a flight costs ¥5,000, so it is quite expensive if you fly regularly," says Sakuma. Nevertheless, he has taken enough flights with an instructor that he has now received permission to fly the plane solo within a designated area.

In addition to weekend flying, the members also meet every Wednesday to discuss flight schedules, flying techniques, maintenance and parts requirements. They also discuss which competitions to enter, where they will be judged on skills such as gliding speed, control, and making use of thermals.

A learner usually needs the experience of one hundred flights before applying for a pilot's license. "If I can get my license by the time I graduate, then I'll be free to fly any time," says Sakuma. "So I hope to continue gliding for years to come."