About the Sailing Team

The Tokyo Tech Sailing Team is a club where anyone, male or female, can have a role. Most members had never sailed before university, but daily practice and drawing on past knowledge has allowed us to perform well at national championships and all-Japan meets.

A connection with the community that goes beyond club activities

The ethos of the Yachting Club is to hone seamanship among members who love the sea, growing into attractive human beings rich with the spirit of tackling challenges. This ethos was born from the total support for our activities offered by the more than 500 alumni who are members of the Kuramae Ushio Association, which forms a pillar of our current training. Our alumni play a large role in the club's relationships with the community, such as annual contracts for training camp sites and insurance contracts. Being a club member means you can remain part of our community even after you stop racing.

What is the appeal of yachting? 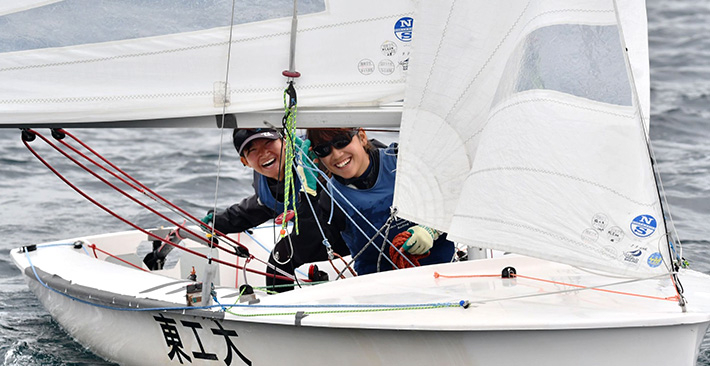 A stage no lover of the sea can resist, a scale unimaginable at the high school level, a mechanical depth experienced when trying out, the character of the older members and atmosphere of the club, and a yearning for the extraordinary. Everyone has their own reasons why they are drawn to yachting.

Yachts, which rely purely on the wind to move, need constant balancing of the shape of the sails and boat in order to sail as fast as possible. Yachting can be likened to chess on the sea due to its high levels of strategy and tactics with other yachts as the winds change. The battle is in both the body and mind, which means that girls or other people with less exercise experience can play a role.

Our two classes of boat 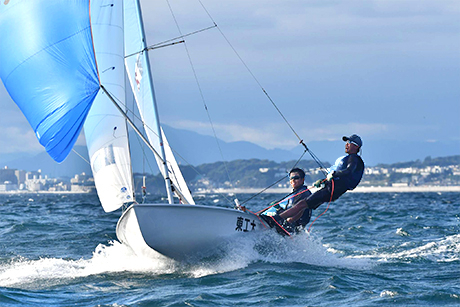 These are yachts 470 cm in overall length, of the type used in the Olympics. They are two-person boats, with the sailor at the prow throwing their whole body outside the boat with a wire (trapeze) to balance it. Using the third sail, the spinnaker, allows it to sail even faster. 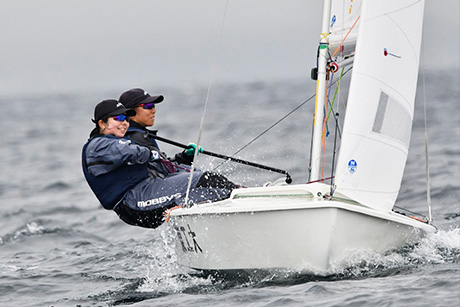 A two-man yacht with a long history. With its simple construction and difficulty in creating speed differences, the key to winning is strategies that make the wind your ally and tactics taken regarding other yachts. Seeing sailors hiking out (leaning out as far as possible) to balance the boat is really impressive. 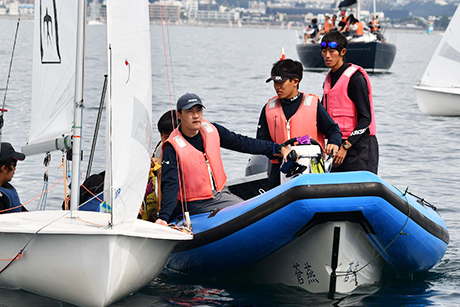 As yachts lack engines, we have two motor-powered support boats to help with training and for checking safety if an accident happens. The club will provide support for getting the license needed to operate these boats. 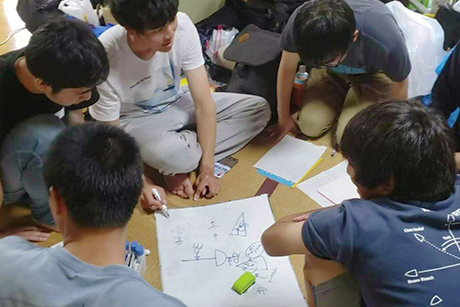 We train each Saturday and Sunday out by Hayama. Members learn the skills and strength required to sail, hone their ability to read the wind, and also study strategies and tactics. Our training is led by club members based on generations of practice. We also get lessons from faculty members, coaches, or alumni five or six times a year, helping us aim for even higher levels. We call this weekend training “training camps.”

We rent out a house and spend the night there together, taking in turns to be responsible for cooking. Spending all this time together deepens the bonds between senior and junior members. There is plenty of free time after training, so our members can have fun together without being divided by class or year. One of the best parts of the Sailing Team is these training camps where everyone gets along together. 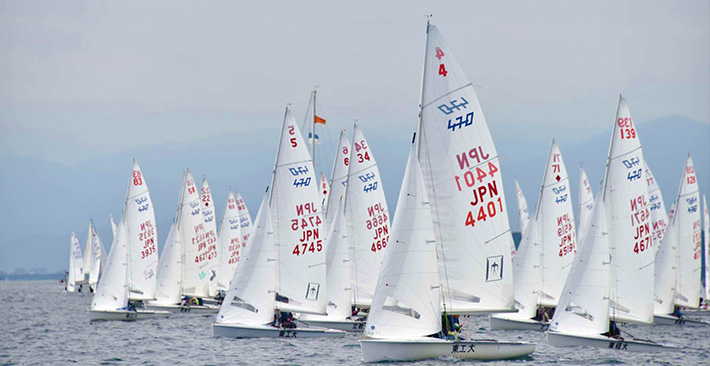 Sailing competition with other university teams

As we normally practice on weekends, we are free to study, work at part-time jobs, or even join other clubs on weekdays. We practice about four days a week during the long spring break. During winter, the off season for sailing, we go skiing.

A proud record at the All Japan Intercollegiate

At the 2020 Autumn Intercollegiate, Snipe Class sailors earned a place at the All Japan Intercollegiate for the first time in 33 years, and went on to take fourth place nationwide, the best result the club has ever had. In the Snipe Class, we reached 21st in individuals nationwide, while in the 470 Class two pairs went on to the All Japan Intercollegiate as individuals. Titech Sailing Team's performance, winning against some of the strongest schools in the country, was the talk of the university yachting world, and Tokyo Tech and our alumni celebrated together.

The Women's Student Sailing Championships, an event for women only, was canceled in 2020, but in 2019, female team members went on to the All Japan Intercollegiate. The Team took first place in the 470 Class and second in the Snipe Class at the 2019 Tokyo Regional Sailing Championships for National and Public Universities, putting us top overall.

Our future goal is to take part in the All Japan Intercollegiate with groups from both classes. All we ask from anyone wanting to join the Titech Sailing Team is the curiosity to start something new. Yachting is the perfect sport for people who want to try something new, as you can draw on what you're good at. We welcome anyone who wants to do something different from everyone else. We're planning on an event in spring where you can try yachting out, so we look forward to seeing you there!