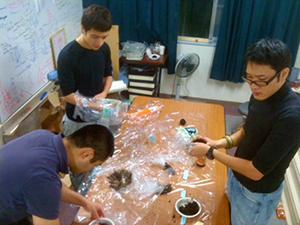 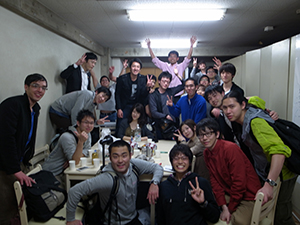 IDA members will be waiting for more students to join!

Tokyo Institute of Technology's International Development Academy (IDA) has increased the number of projects from one to eight over the past year or so. The increase forms part of its goal to support sustainable living, both in Japan and overseas. The Academy (formerly Association) has also increased its membership to more than 20, and now includes a number of Japanese members. Until last year it had been a group of mostly international students.

"We're still actively recruiting international students, but with half the member's now Japanese, it gives us more opportunities to take on new projects," says Junichirou Ishio, president of IDA and a second year MA student studying Applied Economics and Statistics.

One recently completed project involved teaching local primary school children to build a non-electric fan. The idea arose after the March 11 earthquake and tsunami last year left many Japanese homes without electricity. To get support for the project, IDA applied to Tokyo's Education Board for funding, and was granted 170,000 Japanese yen to carry out the project.

"We didn't think we'd need to use the full amount," says Ishio. "But it took a lot of trial and error and experimenting with different materials to develop peddle-powered fans. They also had to be simple enough for the children to be able to make. In the end, we ended up spending more!"

IDA's vice-president, Alvin Varquez, a first-year PhD student from the Philippines studying International Development Engineering, describes other projects underway. In Kenya, IDA is helping a local community develop a more robust charcoal fuel brick. The binding material currently used causes the brick to crumble easily, so the search is on to find a more suitable material from plants grown in the local area. Another project involves helping a Vietnamese village to produce rice wine. "Rice is plentiful in the area," says Varquez. "If the farmers can develop a new market for their produce, it would create a new industry."

Ishio praises the benefits of joining IDA. "I've learnt so much about how to turn an idea into reality, how to get funding, how to manage a team." Varquez agrees. "Researchers can spend too much time in the lab. IDA is a way to make your ideas real by directly helping society."